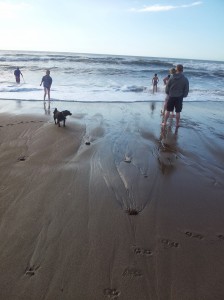 My mother made much of the fact that she loved each of her three children equally and reassured us of the fact with some regularity.

However, as the one in the middle I grew up with the (typical middle child?) feeling that I got a little bit of a raw deal in some respects compared to my siblings, I reasoned that it was because my older sister was the first born and the only girl and my younger brother the baby.

Long after I had left home I did express this to my mother who was clearly shocked that I felt the way I did and said that it was just not true as of course she loved us all equally and treated us all the same.

Of the love I have no doubt, I never felt less loved in any way, but I stressed that I felt it was obvious that I was treated quite differently as I did get reprimanded more and at times over things that my siblings clearly got away with.

My mother considered what I was saying and said ‘you know, that may be true, I think I was more likely to reprimand you in a situation worthy of discipline than the other two, but not because you were the middle child, or your sister the only girl or your brother the youngest, but because it brought the situation to an end in a way that it possibly would not have done had I addressed my anger or frustration at your siblings’.

She went on to say that I was a very easy going child and quite matter of fact and as such would respond to discipline in a way that my siblings would possibly not. She said at times she did not want the confrontation that telling off either my brother or sister would result in, so potentially they did get away with poor behaviour when I did not.

After more thought she said that in fact if two of us were arguing or fighting that reprimanding me resulted in the situation being resolved much more easily than it would have been by reprimanding either my brother or sister. So she could see how she could have unfairly targeted me.

She said she had never realy given it that much thought or picked up on it as being unjust as I seemed quite unfazed at the time.

I guess it didn’t bother me too much and I simply accepted it, but over time and looking back as an adult the reality of the unjustness did strike me and hence the conversation we had – I never however felt any less loved and reassured my mother, who was clearly feeling rather guilty.

Which brings me to my own children, sons just 11 months apart, brothers who have responded to the trauma they have suffered in totally different ways and who require VERY different parenting and consequently get treated quite differently as a result.

Our youngest son is so clearly angry, confused and deeply troubled by what he has been trough and is so obviously in need of considered, therapeutic care, he reacts badly to regular ‘ ‘rewards and punishment’ parenting and just doesn’t respond to the threat of consequences or worse still to our anger and especially not our raised voices.

His older brother is the the complete opposite, he is a child who seems unaffected by his past and who we know wants to please us, he is aware when he has done wrong and accepts punishment as a result of his bad choices. He responds pretty much immediately to us reprimanding him and simply accepts any punishment as a result of his actions – apparently just like I did.

As a child who felt he was treated unjustly how ironic I am now a parent doing exactly the same with my oldest son.

However, I am fully aware of what is happening and why it needs to be so. My own experience and my mothers explanation have helped me understand and appreciate my sons situation and we are careful to make him realise that we know there is a difference and to explain why that difference needs to be.

He seems to get it and so far does not resist in any way, maybe one day he will, but we will be prepared and we will listen and respect his concerns – meanwhile we will constantly reassure him that he is loved equally in every way.